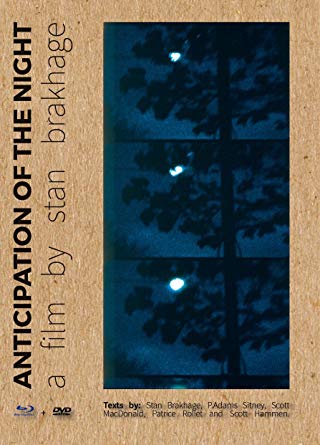 Anticipation of the Night, by Stan Brakhage

Anticipation of the Night
by Stan Brakhage
1958

“The great achievement of Anticipation of the Night is the distillation of an intense and complex interior crisis into an orchestration of sights and associa- tions which cohere in a new formal rhetoric of camera movement and montage.”
-P. Adams Sitney

“Brakhage’s work offers an eloquent and deeply affecting alternative to consumer culture in the West. He abjures predigested emotions, predictable formulas, and “pretty pictures.” His lms cannot be reduced to a simple summary or message, and each viewer’s experience of them will necessarily be somewhat different. The engaged viewer is removed from the state of mind in which to look at a scene or sight is to desire it, covet it, think you understand it, and wish to own it: instead, Brakhage asks for both much less and much more — he asks that you dance with it.”
-Fred Camper

Brakhage’s death is an irreparable loss but also an opportunity for a new begin- ning. There was no catching up with Brakhage when he was alive, but now perhaps we can begin to discover and understand the full breadth and depth of his remarkable cinematic legacy.
-Scott MacDonald