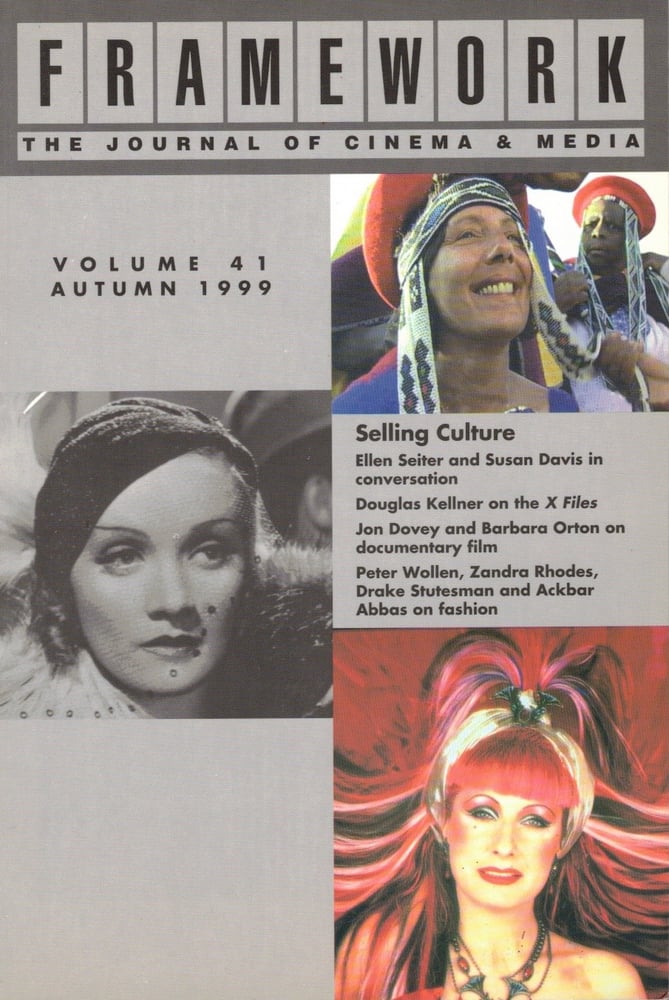 Framework Vol. 41, Double Issue (1999)
The Journal of Cinema and Media

Douglas Kellner
The X-Files, Paranoia and Conspiracy: From the 70s to the 90s

Thomas Austin
Gone With the Wind Plus Fangs: The Assembly, Marketing and Reception of Bram Stoker’s Dracula

Geraldine Howell
Museum of Fashion: an Interview with Zandra Rhodes

TRUE TV
Jon Dovey
At the Sharp End of the Knife: an Interview with Barbara Orton

FESTIVALS
Lúcia Nagib
Film and Politics at the Last Fespaco

EDITORIAL
Sold. In the world of cinema and media, selling cultural products is a sign of the times: marketing, distribution, cross promotion, it is all part of an intense consumer led society. Star Wars food; Star Wars fashion; Star Wars religion: no wonder they call it the 'Phantom Menace'.

But, if the selling of cultural products, whether this be film and media, or concepts and lifestyle choices, is about exchange, then there is greater flow between cultural consumption and cultural waste than we might first acknowledge. This issue of Framework examines the fusion of production, promotion and consumption. Going to the cinema, watching TV, wearing hats, visiting a museum, choosing a holiday, selecting childcare—this is all part of the same cultural organism.

In this issue, Ellen Seiter and Susan Davis talk about the presence of Disney as a producer of mass entertainment, a promoter of ideals, a symbol of an idealised world, and as a merchandiser of leisure goods and experiences, a retail agent for the commodification of space, an educator for young children. In considering the full range of the Disney experience, Seiter and Davis reveal an interesting dilemma. For white, affluent, aspiring Americans, Disney is a popular choice for the family and its Disney Club offers a safe, gated environment for middle class children, and yet, as Ellen Seiter's research with pre-school teachers reveals, Disney may sell safety, but it is also a sign of mass culture, and aspiring parents want something more educational and artistic for their children than Beauty and the Beast. Similarly, Thomas Austin shows how the cross promotion of Francis Ford Coppola's Bram Stoker's Dracula targeted a wide selection of audiences - horror fans, lovers of romance, cineastes—and yet failed to give satisfaction because audiences resisted the fusion of genre categories formulated by Columbia TriStar.

This issue of Framework pursues the negative impact of selling, and also the richness of cross-fertilization. Douglas Kellner explores the impact of seventies' conspiracy theories on the creative development of the X-Files. Barbara Orton talks to Jon Dovey about her new documentary At the Sharp End of the Knife, which follows political activist Cathy MacCormack from the notorious Easterhouse estate in Glasgow to the townships of South Africa where she meets other activists, performers, and broadcasters in a post-apartheid environment. Orton bemoans the fact that commercial documentary film and TV sells poverty as entertainment without giving audiences access to 'real solutions to the eradication of poverty': At the Sharp End… is a direct response to this. Dina Iordinova traces the expanding universe of ethic cinema, charting its distribution from the ethic foodstore to more mainstream video outlets and analysing the creative exploration of place and belonging in film. Lúcia Nagib illuminates a shift from the political Brazil of Cinema Novo, to a more intimate Brazil reflected in a new cinema of observation.
It is the observation of details that informs articles by Peter Wollen, Ackbar Abbas, Drake Stutesman, Geraldine Howell and Zandra Rhodes in our special focus on fashion. Abbas reflects on the theorisation of fashion, Stutesman investigates the making of fashion, and Howell and Rhodes discuss the curation of fashion. Each stage is as important as the other, and should not be seen in isolation. As Peter Wollen comments in his article 'Fashion Notes': 'We should be careful not to fetishize the body as the source of meaning, as if drawing or stitching or shaping were not as human as display or adornment, as if the production of clothes was less vital or real than their consumption.' Although for Abbas, the growth of fashion theory has made fashion 'invisible', Stutesman and Rhodes vigorously argue it is the art of detail, the hard work of fashion that makes it visible to the public, whether this be in film, a museum space, or daily life.

Framework focuses a spotlight on the visible and invisible art of selling. From the development of retail/leisure space, and the shaping of lifestyle choices, to the cross promotion of Hollywood movies, and the creation of fashion, this issue offers a rich consumption experience.