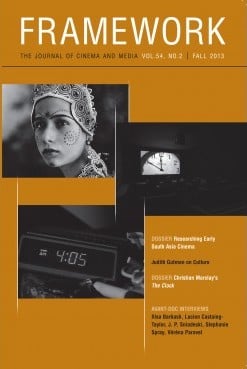 DOSSIER: Early Cinema in South Asia: The Problem of the Archive

Early Cinema in South Asia: The Place of Technology in Narratives of Its Emergence
Sudhir Mahadevan

DOSSIER: Cinema as Timepiece: Critical Perspectives on The Clock

Around The Clock: Museum and Market
Erika Balsom

Firing at the Clocks: Cinema, Sampling, and the Cultural Logic of the Late Capitalist Artwork
Martine Beugnet