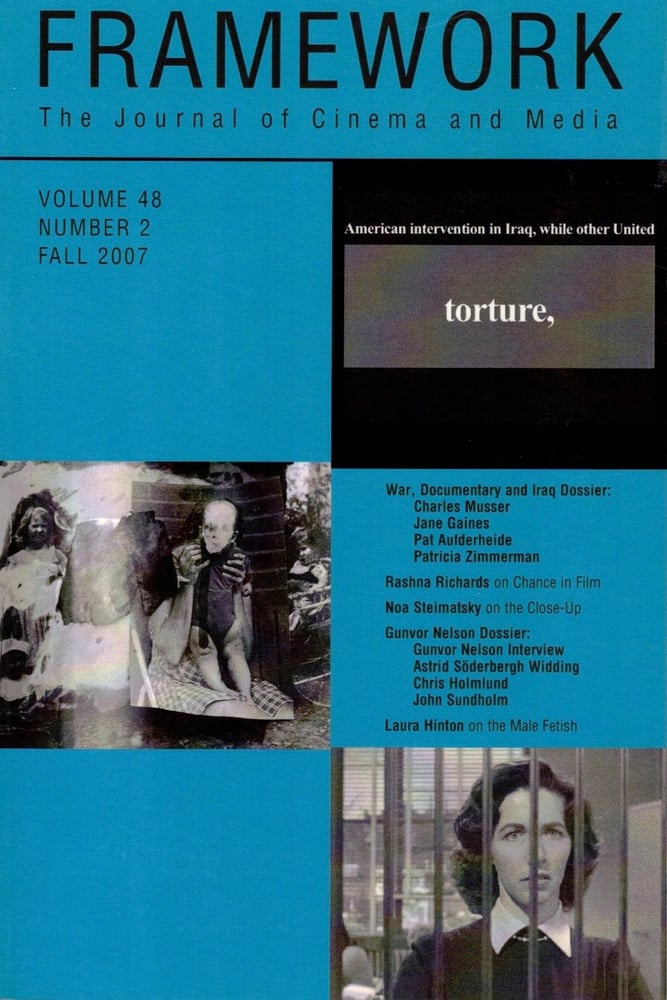 Rashna Wadia Richards
Show-Stoppers: 1937 and the Chance Encounter with Chiffons

Noa Steimatsky
What The Clerk Saw: Face to Face with The Wrong Man

Laura Hinton
(G)Aping Women; or, When a Man Plays the Fetish

Jane M. Gaines
The Production of Outrage: The Iraq War and the Radical Documentary Tradition

Pat Aufderheide
Your Country, My Country: How Films about the Iraq War Construct Publics

John Sundholm
The Material and the Mimetic: On Gunvor Nelson’s Personal Filmmaking

EDITORIAL
Issue 48-2 inaugurates a new Framework feature. The journal will now carry a war focus. How is the U.S. actually dealing with the war? There are surprising conflicts, many made apparent through our media deluge. The media representation, at least in three cases, covertly platforms some of the country’s subconscious stresses. This manifests in how soldiers are represented, how crushing issues—such as torture—are approached and how practitioners in the media identify (or don’t) their war politics. On the one hand, there is a plethora of daily information and many questions: Does the war have a precedent or is it unprecedented? Does it mirror Vietnam or deflect it? Is it a greed fest by a few White House Neo Cons? Is it a banner of new American imperialism? Is it an imperialistic Götterdämmerung?

But what are the real underlying questions that the public is grappling with? On the other hand, while our media, radical or conservative, is inundated with opinions, critiques, biographies, narratives, documentaries, articles, exposés, blogs and interviews, and Congress struggles with the White House for control of the war budget, many U.S. soldiers express an estrangement from their home country, despite unprecedented representation of their voices. An often quoted Army perspective is, “The United States is not at war. The U.S. Army is at war but the United States is at the mall.” Despite the frantic media industry around the wars in Iraq and Afghanistan, there’s truth to that. What does this mean? How is the visual media handling the subject of war, much less contributing to its arguments or to the transformation of the war itself?

There are many contradictions. One example is the issue of torture. Alex Gibney’s documentary, Taxi to the Dark Side (US, 2007), investigates the torture of prisoners in Afghanistan, Iraq and Guantanamo and is one of the first theatrically released films to fully discuss these crimes. It sidesteps the broader scope of torture as a battle tactic and concentrates on official culpability, on torture’s failure and on its murderous nature. Furthermore, in spring of 2007, a Department of Defense study revealed that over 40% of Marines and soldiers felt that torture was legitimate. It could be argued that this in-your-face focus represents the desire for an American public to know the truth and, in many ways, it does. But strangely, torture, of all things, plays another role in American turmoil about the war. We seem to identify not with the torturing aggressor (in this case, ourselves) but with the victim. Since the incidents at the Abu Ghraib prison became public in 2004, questions of torture’s efficacy, legality and morality have swamped the debate. Little has been resolved politically but there has been, in the last three years, an escalation of torture imagery in film and TV. If the media reflects an inner U.S. crisis, then torture and the frighteningly ambivalent questions that its potential use evokes has become a psychological hole for our confusion. It appears in films ranging from cartoons (The Incredibles, Brad Bird, US, 2004) to parodies (Team America: World Police, Trey Parker, US, 2004) to spy thrillers (Syriana, Stephan Gaghan, US, 2005) to horror (Saw 1-III, US, 2004-6 or Hostel, Eli Roth, US, 2005). In these and other fictionalized depictions of torture, it is an American who is tortured not the torturer, suggesting that Americans transfer grim ambivalence about the war into a sense of victimization. This has heightened in the last few years. Now, popular TV shows such as 24 (US, 2001-) and Lost (US, 2004-) exploit torture as a necessary means to an end. It regularly features on 24, as a method to save Americans and, in Lost, the writers went so far as to have a naturalized Iraqi Republican Guardsman, one of the show’s heroes, professionally torture a mild, petite American man. But torture revealed him to be a super-villain. That torture, of all aspects of the Iraq War, should be so culturally appropriated is another mysterious reflection of our inability to articulate this war and place it in context with past wars.

This issue’s dossier on War, Documentary and Iraq is a selection of papers given at the Yale conference of the same name held on February 1-4, 2007. The conference screened some 12 films, documentaries (a few from the Vietnam era) and experimental works, and had mixed panels of filmmakers, academics and journalists. But even here, the oddities of our war climate emerged. One panel set up a “you and us” atmosphere, going so far as to question the “Yale” audience’s suitability to comment on actual war experience. This tone was struck by journalist Michael M. Phillips, who was not a soldier but simply embedded with a battlion, and this was then reinforced by filmmaker Deborah Scranton, who had never set foot in Iraq. Where is this identification with the field soldier coming from? How is it that this romanticized affinity absents itself from actually commenting on the war itself or, even stranger, not feeling solidarity with an anti-war point of view? This is another anomaly of the Iraq War: some war films are not always clear about their politics. Scranton is emblematic of this, hedging her film (which is composed of active duty soldiers’ personal video diaries) and defending the soldiers as if they were under leftist attack. Why does “pro-soldier” preclude “anti-war?” Strange days! How is it possible not to have an opinion? This murkiness was also true for Jon Alpert and Matthew O’Neill’s film, Baghdad ER (US, 2006), which surveyed the army Emergency room operations. But, in my opinion, the film was structured in such melodramatic terms that it bordered on an army recruitment film. Yet Alpert is a renowned leftist reporter who has covered our wars since Vietnam.

A mini “Iraq doc” industry has emerged in the last few years and, with it, polemics that both obscure the war and reveal it. In some sense there is so much reportage, it becomes a wall that we don’t have to really look beyond i.e., to where we would proactively protest the war. In another sense these same films, especially ones such as No End in Sight (Charles Ferguson, US, 2007) and Iraq for Sale: The War Profiteers (Robert Greenwald, US, 2006) serve as editorials, exhorting us to see the facts. With so much war footage crowding the television, movie houses, academy award shows, HBO, and YouTube (recently banned to soldiers by the army), it’s easy to think that this is commonly-seen material with a particularly opinionated audience. Many films, such as War Tapes, Baghdad ER, and Iraq for Sale (represented by their filmmakers at the conference), are publicly known. But how well known? And generating what viewpoint? The dossier covers some of these anomalies. Pat Aufderheide looks at viewer statistics. Charles Musser sifts through the myriad of war documentaries to try and form a lineage of perspective and production. Jane Gaines looks at the peculiar labeling that the war has engendered and at the difficulties that today’s representation causes the anti-war movement. Patricia Zimmerman examines the public war forum and finds that there are many areas full of energized discourse.

A theme of underlying freedom or a new activity within the image also permeates this issue. Authors Rashna Richards, Noa Steimatsky and Laura Hinton trace a subtext of a film or an idea through small details, examining minutiae to make a wider cultural case. Richards joyfully follows the incidental in 1930s films and argues that they make up a classification of their own; Steimatsky follows hidden realms in Hitchcock’s use of the facial close-up in The Wrong Man, arguing that the face contains, in its wholeness, an ineffable state which counters rigid social policies; by a deconstruction of gestures, Laura Hinton re-examines the circuitous course that a female viewer takes to express her desire for a male star by comparing an I Love Lucy episode to Hitchcock’s Notorious (US, 1946).

There is also a theme of the close-up as an avenue into a loose, non-proscribed world as explored by Steimatsky and by the great Swedish-American avant-garde filmmaker, Gunvor Nelson, who is represented in another dossier. Though one is a theorist and one a practitioner, both use the close-up to open a zone of liberation and inarticulacy. Nelson’s work was recently given a retrospective at New York’s Museum of Modern Art (October, 2006), programmed by Danish expatriate Jytte Jensen. The audiences were thin because, unlike other filmmakers such as Stan Brakhage and Bruce Baillie, her work is not well known. But in my estimation, Nelson is the pinnacle of what could be called the late-20th-Century avant-garde triumvirate: that is Gunvor Nelson, Bruce Baillie and Stan Brakhage. Brakhage rightly considered her work to be “more true to the intrinsic possibilities of film than any but a few in the history of the medium.” Her films and videos, over some 40-plus years, tap into much experimentation: animation, stop frame, scratching or painting on film or objects, inventions with lenses, with sounds, with interiors, with framing and with nature. Chris Holmlund, John Sundholm and Astrid Söderbergh Widding examine her work and try to expand the context of her art and her place in cinema history. -Drake Stutesman