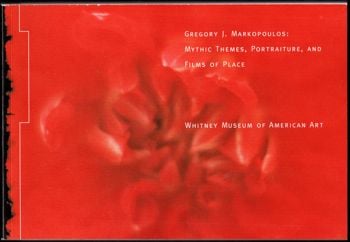 "The Whitney Museum of American Art is honored to be presenting "Gregory J. Markopoulos: Mythic Themes, Portaiture, And Films of Place." It is particularly appropriate that on the occasion of the Film and Video Department's twenty-fifth anniversary as a leader in the presentation of film and the media arts that we are honoring one of the seminal figures in the history of the art of film." -David A. Ross in "Director's Foreward"