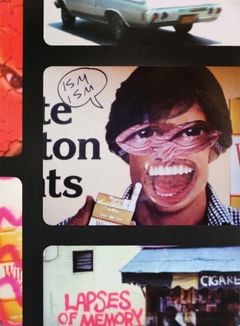 Economically downtrodden New York City in the 1970s was like the end of the world—but only if you chose to see it that way. For young artists running amok in the collapsing capitol, the possibilities seemed endless. Manuel DeLanda, a Mexican transplant enrolled at the School of Visual Arts, saw the overcrowded sidewalks and decrepit subway stations as blank canvases for inspired mayhem.

Recognized today as a philosopher, professor, and author (of War in the Age of Intelligent Machines and A Thousand Years of Nonlinear History, among other titles), DeLanda initially came to prominence as one of the premier experimental filmmakers of his generation. Fueled by the gonzo humor and graphic audacity of Frank Zappa and ZAP Comix, DeLanda’s fevered productions were among the most deliriously innovative movies of the punk era. While films like Raw Nerves: A Lacanian Thriller and Incontinence: A Diarrhetic Flow of Obvious Mismatches are certified underground classics, DeLanda’s visually striking, virtually unknown graffiti work (signed with the tag “ISM ISM”) has long remained more urban legend than legendary.

ISM ISM presents a comprehensive overview of DeLanda’s ephemeral street collages with a colorful frame-by-frame breakdown of a Super 8 short film completed in 1979 in order to document his sweetly subversive activities. Extensive still images, an expansive interview, and copious contextual materials combine to illustrate the story of DeLanda’s aesthetic attack on 23rd Street, including his friendly competition with fellow artist-taggers Keith Haring and Jean-Michel Basquiat.

See the film at ismism.net