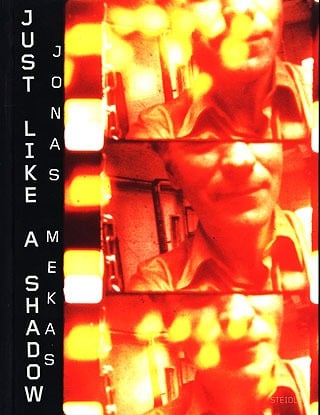 Having spent all his life with his Bolex camera, [Mekas] never ceased writing a long intimate film from which these photograms were extracted. Jonas Mekas, himself, affirms that cinema "is just a photogram, one single photogram!" All along the book we encounter a great many of his friends such as Andy Warhol, Nam June Paik, Robert Frank, the Kennedy family, Salvador Dali, John Lennon and Yoko Ono, Nico, Gerard Malanga, Allen Ginsberg, Henri Langlois, Stan Brakhage, Jack Kerouac, Lou Reed, Miles Davis and many others, without omitting all those moments, happy or not, which he captured with his camera and his malicious eye.

"Jonas Mekas's collection of film snippets is loaded with images of the famous -- like Jacqueline Kennedy Onassis and Caroline Kennedy, and John Lennon and Yoko Ono at their Montreal 'bed-in' -- but these are not conventional portraits. In JUST LIKE A SHADOW (Steidl/ Scalo, $29.95), sequences of three or four film frames, often sliced randomly midframe, are presented with sprocket holes and scratchy optical soundtracks intact. Mekas's images are jerky with movement, either washed out or underexposed, and seemingly shot from the hip, but all have a feeling of spontaneity and the immediacy of life. Norman Mailer's quizzical, pained expression is juxtaposed against the American flag; the ailing but indomitable George Maciunas, the founder of the Fluxus art movement that links many of the subjects in the book, is shown smiling in his hospital bed. There is a marvelous sense of intimacy to Mekas's art of simply filming experience: a sequence of his young son vying with a large ginger cat is an ephemeral yet timeless moment. 'My film work is one long film which is still continuing,' Mekas says in an interview with Jerome Sans. 'I don't really make films: I only keep filming. I am a filmer, not a filmmaker.'"
-The New York Times